The Bitcoin Cheque concept is a second-layer payment system that will support unlimited instant payments.

Basically, a Bitcoin Cheque is a file promising that its issuer will pay a certain value to the holder.

The Bitcoin Cheque is the basic building block to make a second-layer payment system. Payments are standardized and sent as Bitcoin Cheques. All users can send cheques between each other.

The system is based on trusted third parties, which will record transactions outside of the blockchain and thus overcome the Bitcoin scaling limitation.

How to use it?

The Bitcoin Cheque are typically issued by Bitcoin Banks. When a user wants to purchase an items, he can request a Bitcoin Cheque from his bank and give it to the merchant as payment. The Merchant then later collect the money from the bank.

The banks later clear out aggregated outstanding and due values directly with each other and won’t rely on a central clearing house.

A user wanting to pay with Bitcoin Cheques, installs a Banking App in his web browser or cell phone. The Banking App will connects to the Bitcoin Bank.

When the user visits a web site and is offered some content or goods, he clicks on the payment request link/button and the Banking App will then take care of the rest. This will allow for one-click instantaneously payments.

First time a user will make such a Bitcoin payment, he will automatically be redirected to a recommended Bitcoin Bank. Here he can register for an bank account, buy some Bitcoins and download and install the Bitcoin App. He is then ready to use Bitcoin.

Bitcoin Cheque shares many characteristics with the long-existing bank payment cheque, which is usually printed on paper.

How does it works? 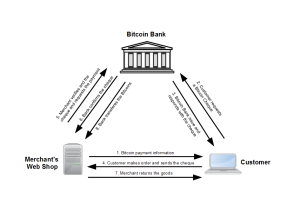 A trade using Bitcoin Cheque will involve three parties, the user himself, the merchant and a Bitcoin Bank.

Bitcoin Cheques can be sent using a Money Address. This is conceptually is like an e-mail address, except the purpose is to send money.

Difference is @ character is replaced with a * (asterisk). The Money Address points to a Money Service API, which can be easily be implemented on a web page.

The Bitcoin Cheque and its protocols will solve most of the weaknesses Bitcoin has, in respect to the user experience:

The Bitcoin Cheque and its surrounding infrastructure will make it very easy to pay with Bitcoins. The system will enable people with little or no technological knowledge in computers, with no experience or incentives in using Bitcoins, to start using it. Thanks to Payment App Browser HTTP Header Standard, new user without a Banking App, or other Bitcoin wallets, will be automatically redirected to a recommended Bitcoin Bank where they can get an Bitcoin account and the needed Banking Apps.

Since Bitcoin is offering very low transactions fees, merchants will have an incentives to start accept it. And once there is no barriers for customers to pay with Bitcoin, they happily will start paying with Bitcoins because of the advantages and the lower fees. All these features will help mass adaption of Bitcoin usage.

Once the Banking App has been installed, a user can send money to his peers by using the Money Address. The receiver is not required to have anything installed and not required to be a existing Bitcoin user. This will contribute to the adoption even more.

The standards and protocols are under development.

In order to demonstrate the usage of Bitcoin Cheques, we want to setup a Bitcoin Bank, and develop needed eCommerce modules and Banking Apps for browser and smart cell phone. The following open-source projects has been initiated:

These project aim to solve a real world-problem in charging micro-payments for web content. The project will in particular be addressed to blogger, newspaper and info sites and will allow them to monetize their content by accepting Bitcoin Cheques.

This is a huge undertaking and contribution is appreciated. If you want to contribute, register and join us today!