Basically, the Bitcoin Cheque is a file promising that the its issuer will pay a certain amount to the holder.

Bitcoin Cheque is a file promising that its issuer will pay a certain amount of bitcoin to a receiver. The cheque can be used to transfer bitcoins between two persons or pay for online purchases. Assuming the receiver trusts the cheque and its issuer, this can facilitate instant payment.

Bitcoin Cheque shares many characteristics with the long-existing bank payment cheque, which is usually printed on paper. The cheque file format is standardized, so it can be read and processed by different parties. An image of the cheque can be generated, which can show as a file icon. The image can be embedded into the cheque file or linked externally.

Conditions can be added to the cheque to set constrain for who can receive its value. The condition can be set to a Bitcoin wallet address, an e-mail address or a Money Address. Bitcoin Cheque includes an expiration time. If it has not been claimed within that time, the cheque expires, and the bitcoins are returned to the user who draws it. The cheque can be signed so its authenticity can be verified by anybody having the issuers’ public key.

The Payment Cheque standard is based upon the following requirements and premises:

The latest version of the Bitcoin Cheque standard is located on GitHub: 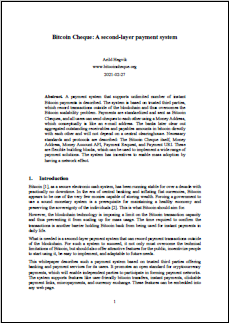